In this tutorial we are going to compile everything with the armeabi-v7a ABI. Make sure your emulator uses this ABI and not x86. If there is some interest in a tutorial for x86 compilation I might write another tutorial for that.

You can skip the next 3 sections if you already have an armeabi-v7a Android emulator setup using the AVD and the NDK setup.

First start the Android SDK manager and install the latest Android API including ARM EABI v7a System Images. To make sure you don't run into any issues also select everything that is not a System Image for that version. 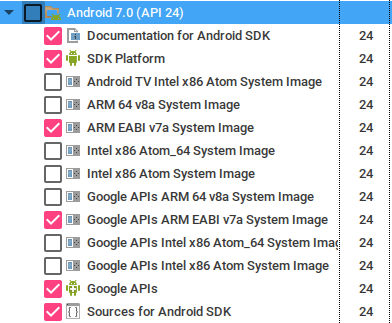 Select these packages and then hit Install Packages... at the bottom right. A dialog with licenses for all selected Packages will pop up. Once you have read them, check the Accept Licenses combo box. Note that this will only affect the currently selected category at the left. Make sure you have accepted all categories and not just the current one, otherwise you might need to open the Install dialog multiple times which might be annoying if you have a slow internet connection and want to keep it open over night.

For D development you need the Android NDK. On some platforms it might be available in the Android SDK manager. On most linux distributions there should be a NDK package in your package manager of choice.

If you didn't find the NDK in your package manager you can manually install the NDK.

Once installed make sure the NDK is available in the command line under a $NDK variable.

Checking if it worked:

should print some information about GNU Make.

Now open the dialog to create a new virtual device. 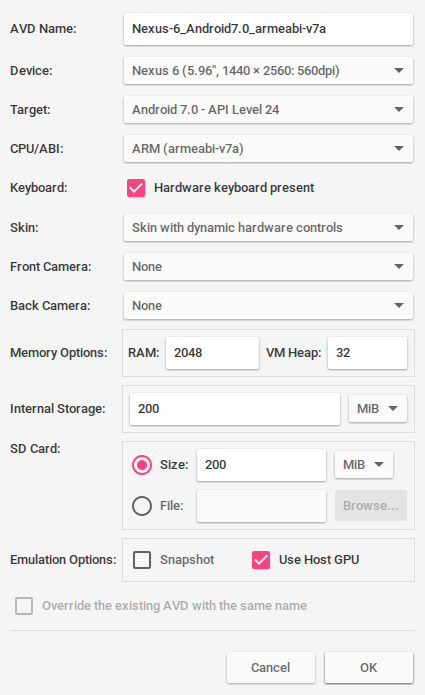 If you are on linux x86_64, you are in luck! There are prebuilt binaries

If you are on any other platform check the D Wiki

Alternatively you could also program on your Android phone and use the prebuilt binary for android. Then you can just get a terminal app on your Android device and compile using ldc from your phone. In my eyes this only makes sense if you are on a tablet, programming on a phone keyboard might be a bit more difficult than it needs to be.

We are going to use the App made by the author of the Android patched LDC repository here. I might provide more information how to do this from scratch in a future tutorial if anyone is interested. Otherwise just look at the samples in the repository.

Assuming you are running the Android emulator using the AVD manager, simply run this command to install the App on the emulator:

To run it on an Android device you can just copy the apk and move it to your phone's SD Card. You also need to enable Allow external App sources in your Security Settings if you do this.

Now we have compiled and packaged the sample app. But to be sure that it really used the D code and not the C code which is unneccessarily also added in the repository lets try modifying it. Right now the app will cycle through some colors based on the last position where you have touched the screen. Let's try to remove the cycling through the colors so it is a still background based on the last touch location.

Edit jni/main.d and go to line 137 where it calls glClearColor.

The second argument in this function call (the green channel) is just a floating point number constantly counting upwards in line 298. So lets just try and change it to a constant value like 0.

You might want to get some build system to do this for you.

Now run the App again and now when you touch somewhere on the screen the color should only change when moving. If it is still continously animating and you are sure that you have updated the D code you have done something wrong previously.

In this case remove the libs folder, remove the bin folder, uninstall the app from your Android emulator/device, run android update project -p . -s --target 1 again and redo the step above. Error messages should guarantee to pop up if you have done anything wrong, otherwise it should work now.

Now that you have successfully compiled and modified your first Android App in D, check out the other samples and mess around with the API. You might want to setup some build tool or script to simplify all the commands for compiling, linking, etc.

Some libraries such as DlangUI have been ported to Android already aswell. If you want to make a more advanced App, try it out. DlangUI is completely written in D and shows quite a lot of potential.

I might write more tutorials for Android Development in D if anyone is interested. To show me that you liked this tutorial or found it useful please reply to the Post in the D Forums or mention me on Twitter @WebFreak001 or on the D IRC on freenode.

Any feedback is appreciated.

If you ran into some other problems or had problems setting up, check these links:

If you are still having problems ask on the D forums (in the Learn section) or on the D IRC. People will probably help you out there. If I am on the IRC you might as well want to ping me with WebFreak001, I am happy to help you out most of the time.